I've been trying to get Jason more interested in learning the alphabet better. He recognizes about half the letters, but doesn't know their sounds and stuff. So I've been at least working on getting him to recognize all the letters first. When I have him practice writing them though, he gets bored very quickly and doesn't want to finish. 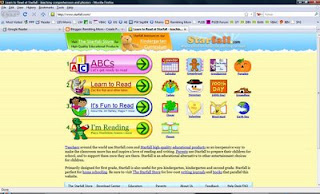 So yesterday on one of the messageboards I visit, a lady posted a link to a site that helps kids learn the alphabet and reading. It's www.starfall.com. The boys LOVE this site! I have them doing just the first part, which is for learning the letters and their sounds. Once Jason is better with the letters I will have him play the second section more, which deals with the sounds of some simple words by reading short stories. It's hard to explain, but it is really cute, easy, and fun. The boys have been playing the ABC section a ton the last few days. 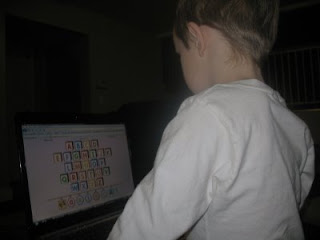 I'm hoping that soon I'll be able to start teaching Jason to read. He'll be 5 this year but won't be going to Kindergarten until next year because of the deadline. So we are planning to put him in preschool a few days a week this coming school year and I want him to be ready to be in a school environment.
Posted by Kara at 2/06/2009

I love this website. My daughter basically taught herself how to read by playing around on this site.

My aunt teaches preschool and she told me about this site last year. I had forgotten all about it. Thanks for reminding me!

I'm bad about just reading and not commenting too. But I've really enjoyed seeing the '365' pictures of the boys. I know you have your hands full - but you are a very lucky mommy!