Shock of a lifetime!

Alright, I think I mentioned that Wednesday (yesterday) we were having the ultrasound where we would find out what the baby is. I was supposed to have a regular appointment before the ultrasound but there was a mixup and I ended up having my regular appointment this morning. So we got to the ultrasound early and they got us right back (thank heavens! The boys were already tired and bouncing off the walls). The ultrasound tech was super nice and had another lady there she was teaching. We got started and she was chatting with us about our boys and how many kids we had in our families.
I was just waiting for her to really get started and not following the conversation closely, so when she said, "So this will be 5 then," I just kind of looked at Nate confused. She then said, "Did you know that? You are having two."
UM, WHAT?!?!
Sure enough, we are having TWINS!!! Oh my gosh! You should have seen how shocked we were. I just kept grinning, and I think Nate asked, "Are you sure?" about a dozen times lol. She showed us each separate baby to prove it.
We did a bunch of the measurements and stuff they have to do, then got to the fun part of finding out the genders. Baby #1 showed us right away that he is 100% BOY! One down, maybe we'd get a girl for the other? But nope, little BOY #2 wasn't shy either! Got some very obvious proof that we are having 2 BOYS!!! Holy cow, I will have 5 boys!
Here's a pic of my two baby boys: 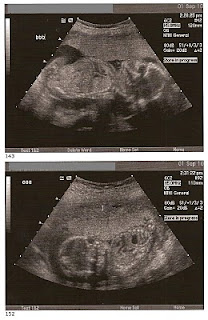 And before you ask- we did not have an early u/s so this was the first time we saw them so we had no clue, yes twins run in my family and I was in denial that me being bigger this time might be twins, and no we probably won't know if they are identical until after they are born because they have separate sacks but many identicals have separate sacks, though they could as easily be fraternal. And now I have to switch from the midwife group to the high-risk OBs, which kind of stinks, but you do what you gotta do. :) We are shocked but thrilled and so so excited!
Posted by Kara at 9/02/2010

I would be so overwhelmed if I were expecting twins! I am so excited for you, they are going to be so cute. Maybe you'll get small babies this time.