Happy Birthday to Me!!! 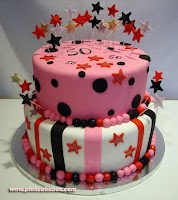 Yep, one year older. Yesterday was my birthday and I turned 25. My little sister came over to watch Jason and Jakey while Hubby took me out to dinner and a movie. We ended up leaving later than planned since we were waiting for someone who said they might buy our old TV, but they never even showed or called. So we were out much later than I like and I didn't get to sleep until 1am or so. We went to Olive Garden for dinner. Yummy. Then we went to see Twilight. I have to admit I was not impressed with the movie. It could have been so much better. Edward looked like he was about to throw up the whole time and Bella was just too nervous and shaky. I did enjoy some parts, the second half was better than the first, but overall I thought it wasn't that well done. Hopefully the next one will be better.

Anyway, I have a chiropractor appointment this morning so I need to get the boys ready to go. Baby is fussing at me. Have a great day!
Posted by Kara at 12/12/2008

Happy Birthday!!! Also I HATED the movie! It was terrible! I even went in with very low expectations and still thought it was terrible. Have a great day!

Happy Birthday! We are going to Olive Garden tomorrow to celbrate our anniversary!

Happy Birthday! How's the big two five,-probably pretty much the same huh, hope you had a great day.

Found your blog while clicking around.
I totally agree about twilight. I found out the author went with a lower budget production company because then she could have more input with the movie. Hopefully they made enough $$ to make the next 3 amazing.
http://elislids.blogspot.com/