So, I know everyone has one. That one (or 2) drawer in the house where random stuff collects. The Junk Drawer. It gets filled up with everything from old birthday cards to teflon hose to pens that don't work anymore. Why do we hold onto pens that don't work anyway?! It's not like they are going to suddenly start working again when we are on the phone scrambling for something, anything, to leave a message with, clicking through the pens trying to find one that works.

Anyway, so yesterday I did it. I tackled my junk drawer. I've been meaning to for a while but it's one of those things that just always fell to the bottom of my to do list. Instead of everything else on my to do list yesterday I decided to bump it up to the top.

I started by taking everything out and putting them in piles. Useless junk went straight to the garbage can. There were probably 20 pens in there, and amazingly about 15 of them still worked! I took a bunch of craft stuff down to the storage room and a bunch of random nails, screws, and hardware out to the workbench in the garage. Then I reorganized the drawer with a bunch of boxes to sort stuff and put stuff away. 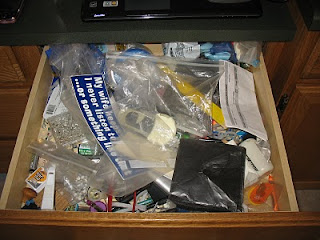 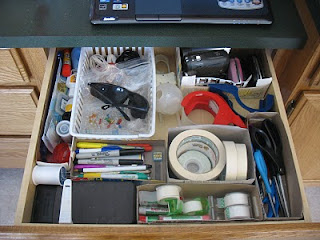 Isn't that so much better?! I can actually find stuff in there! And I moved a bunch of stuff from the cupboard above to the drawer where it's easier to access.
Posted by Kara at 3/30/2011