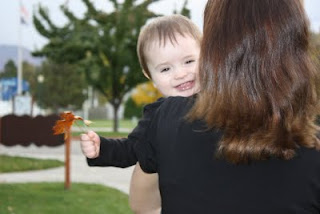 I really can't believe how incredibly fast this year has gone. One year ago at this time I was arriving at the hospital, in lots of pain, wanting them to just get him out of me. And they did. It wasn't the way I planned, but many things in life don't go as planned. The emergency c-section under general anesthesia, and the 4 hour time between his birth and the first time I got to see him, didn't change how in love I was the moment I laid eyes on him.

Nathan is such an amazing little baby. He is usually in a good mood, calm, and happy. Like any baby he has his share of fussy times, and he still is not the best sleeper (though it's getting better), but overall he is just such a joy. His laughter and smile light up the whole room, making me feel so blessed to have him in my life.

I have been somewhat grateful for him taking longer to learn to roll/crawl/stand/etc because that has allowed me to have him as a little baby for longer, though the time still seems so short. He is now moving all over the place. He has what I call the "power crawl", when he really wants to get to something he puts his head down and just charges toward it, leading to a few bumps. He is also now pulling himself up to the furniture and just in the last few days has started cruising around the furniture. He babbles constantly, no real words, just strings of dadadada...bababa...nuhnuhnuh. But he understands more than he says. If I say or sign "milk" he gets a big grin on his face and if I don't nurse him right away he will get very upset at me for daring to say that without following up on it lol.

Speaking of nursing, this is the longest I've nursed one of my kids. Jason I made it to 11.5 months and with Jakey I went 11 months. This time I was determined to make it to that year mark, and I did it! I still nurse on demand 4-6 times a day, and sometimes at night. I don't know how much longer we will keep it up, but for now we both still enjoy the relationship.

We had his birthday party last weekend (a joint party with his cousin who is 3 weeks older) so we aren't doing much today to celebrate, but I do plan to make a cake or something. He doesn't care what day it is, but I am celebrating his birth, when my life changed yet again. It is now 8:57, his birth time. Happy birthday, Nathan. Mommy loves you.
Posted by Kara at 11/13/2009

Happy Birthday Nathan!I seriously can't believe he is a year already! He's such a little cutie.

What a cute picture! Happy birthday to your little guy.

Happy birthday Nathan! I can't believe he's one already. Do you feel like time has flown by faster with him than with your other boys?