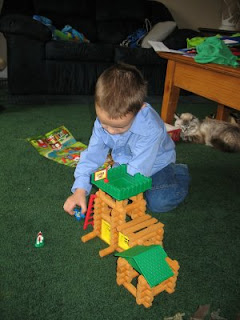 My brother and SIL bought Jakey some Lincoln Logs for his birthday. Unfortunately Jakey was only wearing underwear when he opened the present so I'm not going to show you those pics lol, but instead you can see who actually spends more time playing with them- Jason. Jason's the builder in our family, Jakey's the deconstructor lol.

That reminds me of a toy my siblings and I used to play with. They were these big waffle blocks that we built tons of stuff with. Hm, can't remember what they were called, but I don't think they sell them anymore. I'm going to look up what they were. Oh, guess they actually were called waffle blocks. They were made by Little Tikes, and they sell mini ones still, but the giant ones were awesome. I bet I could find them on ebay or something, but they probably cost a bunch. I love that you can find just about anything online and pay for it with PayPal or Total Merchant Services or whatever.

Hm, sorry I keep rambling. LOL I'm just tired and my mind doesn't know when to shut up when I get going about something. I still have plenty of pics to go through to.
Posted by Kara at 6/28/2009