Told you my appetite is dipped in chocolate!

On Mondays (and now Wednesdays) I watch Little D's big brother for a few hours after school. I like to try doing something fun with them while he's here, and it seems to work because his mom tells me it is his favorite day of the week now. This month Scout (my nickname for him on here, because he's in scouts and his name starts with S) had a birthday and to celebrate it we had a little surprise party when he got here Monday. I made some cupcakes and we sang happy birthday, and then we had fun dipping stuff in chocolate. 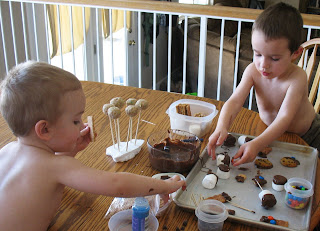 The boys really enjoyed themselves (I cut Scout out of the pic for privacy purposes) and made a bit of a mess, though not as messy as I'd expected. We had cake balls, graham crackers, animal crackers, cereal bar pieces, cookies, and marshmallows. I also had some sprinkles, M&Ms, and chocolate chips to embellish our treats with. Jakey started eating stuff before we even finished. He ate the chocolate off half of the marshmallows, leaving the unchocolate portion in a gooey mess on the table. Their favorite treats were the cake balls. 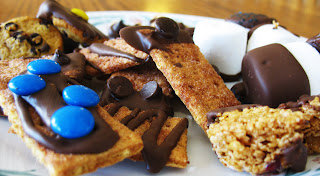 It only took one day to eat up all this yummy chocolate-dipped sugary goodness.
Posted by Kara at 4/22/2009

i noticed you rejected my ad, any reason why?

My mouth is watering like crazy right now. I haven't had chocolate in a month (due to a very gassy baby)! I just want to lick the screen it looks so good. :) You are such a good mommy.